Patients are required to show proof of vaccination through the Services NSW app. Those who are only partially or not vaccinated will require a negative COVID test 3-4 days before their appointment. Please familiarise yourself with Our Hygiene & Safety Policies before you visit the practice. 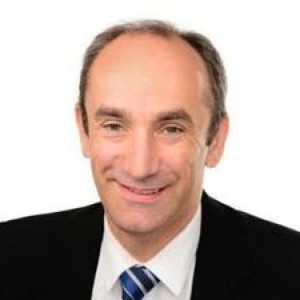 MR W, a 27 year old recycling collector presented with a painful left eye, having possibly had a foreign body in the left eye for several days. He had a past history of Herpes Simplex Virus Keratitis (HSV) affecting the left eye. He was seen elsewhere and was treated for presumed HSV keratitis with acyclovir eye ointment five times daily and prednisolone acetate eye drops (Prednefrin Forte) every 2 hours. After several weeks of treatment Mr W was worsening and was seen here.

The appearance shows a large corneal infiltrate with a “satellite” lesion beside the main infiltrate. There is a small hypopyon visible inferiorly. The eye is very injected.

The appearance is suggestive of a microbial keratitis. Whilst Herpes Simplex Virus Keratitis is a possibility, the lack of response to prolonged treatment suggests that other organisms are more likely. Bacterial, fungal and atypical organisms are possibilities. The relatively slow course of the condition and the presence of a “satellite” lesion are suggestive of a fungal keratitis. Corneal scraping is required to obtain the diagnosis.

The patient was admitted to hospital for urgent investigation and treatment. Corneal scrapes were performed for microscopy, along with cultures for bacteria and fungi. HSV PCR testing was performed.

Mr W was commenced on intensive fortified topical antibiotics in the form of gentamicin 0.9% and cephalothin 5% hourly, along with oral valacyclovir (Valtrex) 1000 mg twice daily. The topical steroids were stopped. In addition homatropine 2% three times daily was used to dilate the pupil.

With the diagnosis of a fungal keratitis, topical Natamycin eye drops hourly was commenced.

Several days later, microscopy revealed the fungus to be Scedosporium Prolificans, sensitive to Voriconazole anti-fungal agent. The antifungal treatment was changed to Voriconazole orally and in compounded drop form.

Despite intensive treatment for two weeks, the keratitis worsened and was invading the cornea close to the limbus. At this stage, the decision to perform a corneal transplant was made.

Following corneal transplant surgery and several months of recovery, Mr W recovered to a visual acuity of 6/7.5. Several years later, the transplant continues to function well and Mr W is maintaining excellent vision in both eyes.

Mr W demonstrates the importance of reconsidering and re-evaluating the diagnosis when the clinical response is not as expected.

Microbial keratitis is an urgent situation which requires immediate and intensive treatment. Whilst fungal keratitis is relatively rare, and bacterial keratitis is much more common, there are a few hints that suggest that fungal keratitis is a possibility here. The occupation of Mr W as a recycling collector suggests organic matter and less common organisms may be a possibility. The relatively slow progression over several weeks suggests a slower growing organism such as a fungus. The presence of a “satellite” lesion is also characteristic of a fungal infection. Despite these hints, only a confirmed diagnosis on culture and microscopy can confirm the organism.

Fungal keratitis can be very difficult to treat. Scedosporium Prolificans is often a resistant organism, and despite being treated appropriately with anti fungal medication, the infection continued to spread. In such cases it is prudent to remove the infection with a corneal transplant prior to the infection spreading to the sclera. Despite the difficulties in such cases they are typically successfully treatable as seen in this case.